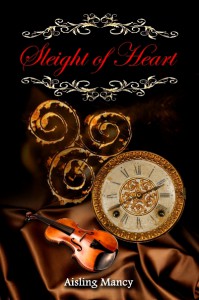 Cover – Nice!
POV – 3rd person, dual POV with omni slips
Would I read it again – Not sure.


Quite honestly, I'm of two minds about this book. In some ways, it was a great paranormal story that made me feel for the characters. In other ways, it had unnecessary elements – excessive violence, incredulous aspects and an overwhelming sense of there being too much crammed into one story.

For me, I'd have loved if this story had stayed to it's roots: a Romani and the vampire Taliesin. When the other aspects of a talking dragon and a whole host of supernatural creatures were added, that was where it lost me.

It didn't help that there was zero warning about the incest and sexual abuse that was a pivotal part of the story. I, honestly, wouldn't have read it had I known. And the fact that it wasn't mentioned in the blurb or in any instance when I opted to read the book means that other unsuspecting readers may pick it up and end up suffering from the triggers and that seriously impacted my mood when reading it.

I didn't particularly love the MF sex, either, which wasn't even hinted at, but at least it was only one instance.

As for the writing, the style was okay, but I found it to be a little too...grandiose? I'm not even sure if that's the right word. But there was a whole lot of posturing with the words chosen – nacreous, for instance (most of which I had to look up, because I'm not a walking dictionary), which impeded the flow of reading. There were issues with editing – italics missing from thoughts, slips of omnipresence, and a continued lack of explanation for the Romani and French terms used within the story. I think I counted at least thirty terms that were unknown to me, without using a Google translate option, within the first chapter alone.

There was also an issue with phrasing. Perhaps it was to show how old Taliesin was, but phrasing the time in this way → “evening in Wales along about ten” → and expecting us to know it's not an editing error but means that the time is around about ten o'clock is frustrating and not obvious at all.

Part of the problem was that it felt as though I had to read the author's mind for half the book. Both for what these strange phrases were supposed to mean, because they weren't explained ever, but also for the Romani and French terms that weren't explained either. Even some events weren't actually explained and we were expected to draw our own conclusions, which is one thing, but it's another entirely to end the book not knowing what happened and having not one character talk about what really did happen.

I also had an issue with the POV. It was a 3rd person, dual POV, which is fine. Except that sometimes it was one paragraph for Taliesin and the next for Pesha, then back and forth for about two pages. If it had been omnipresent this would have been fine, but it wasn't. Each POV was separated by a gap of a line (ineffective on a Kindle, because they're often hidden at the top or bottom of the page, so go unseen unless something like caps or the formatting of the first line of a new scene is distinctive, which it wasn't here). That meant that we were flipflopping between POV's constantly, even when it wasn't necessary. In this case, I believe it would have been better as an omnipresent POV, since there were continual slips of that anyway. It would have helped with the flow between scenes and made things less confusing.

Overall, the good things were mostly feelings. Nothing that I can really put into words, except to say that I really liked the characters Pesha and Taliesin. I liked their romance and how it took time, that Pesha was ever persistent to return home out of loyalty. I even liked his speech patterns, that showed that he was uneducated but set in his ways.

I just feel that the storytelling let it down. The incredulous aspects and the unnecessary influx of violence, excessive explicit sex and the issues with the writing style meant that I could never get comfortable within the story.

Overall, I'm sensing that it's a problem between me and the author. We're not well matched, but I'll give them another go as this is my first book by them. If it's a second mis-step, then I know that it's a simple matter of my preferences not matching with their style. And that's fine. But I had high hopes for this and I'm afraid it just didn't live up to them.

I've spotted on Goodreads that it's part of a series. I'll be interested to read the next book, just for curiosity's sake.