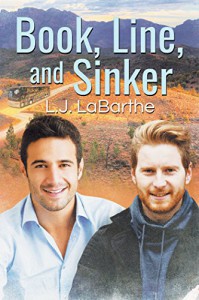 Cover – Very nice (though, FYI, the bus doesn't fit)
POV – 3rd person
Would I read it again – Probably not.


** I WAS GIVEN THIS BOOK, BY THE AUTHOR, IN RETURN FOR AN HONEST REVIEW **
Reviewed for Divine Magazine

This was a really hard one to review. This is actually my second try. My first review was written as I was reading, while everything was still fresh. This one is after some thinking and percolating.

To start with, the story has so much potential. It could have been a really fantastic 4 or 5 star read, if it wasn't for all the over-description. That was the only real thing that put me off. More emphasis was often put on the description (flora, fauna, locations, rooms, weather) than on the relationship. There was some minor flirting, some cute, funny conversations and a lot of teasing between Jaxon and Ash, but it just didn't extend far enough for me. We were told, rather than shown, the chemistry between them. And the relationship was rushed beyond what felt comfortable. Within the space of one week they were calling each other 'babe' and settled as boyfriends. A week later, they were sleeping together. But the growth wasn't really there.

I could rhyme off all the problems in detail, but I won't do that. I'm going to bullet point it, to keep things simple and get to the point.

It was slow going. The relationship took a backseat to the Book, Line, and Sinker project.
Some of the Australian slang was difficult to navigate. The glossary at the back was helpful, but it didn't really help while reading the story. Only a few things were obvious, from the way they were spoken about. The rest was a mystery until the glossary. 'Damper' and a few others are still a mystery.
Ash was in no way ready – emotionally or physically – for a relationship. Especially one that progressed as far and as fast as his relationship with Jaxon. Yet, it's one of the first things he does when he gets back home after 17 years away, in the army.
Most of the book is told day-by-day, even when not much is happening. It feels dragged out and really laborious to read.
There are repeat descriptions (scenery and details of the town)
Information dumps on everything. It would have been nicer to have it dropped in where appropriate, when appropriate. Some information is nearly a page long, for a simple description of weather or a particular area or plant.
Ash isn't a complainer, but he really focused too much on whining about how much his home town had changed. He's been away nearly two decades, so it's silly that he thought nothing could change.
There's a disconnect of descriptions. At one moment, everything surrounded Ash is told in a mass of detail that borders on overkill, but Ash can't tell who Jaxon is, on first sight, despite having been given a very vivid description of him. Yet, at the same moment, he can tell he's wearing a watch with a black leather band and Buddhist beads. We're also not told that they exchange numbers at dinner (a dinner we get to read about), until later, when Ash goes to call Jaxon.
There are issues with the time line. Sometimes people talk about doing things one day, then end up doing it another. It's also difficult to keep track of what day it is, at the start of each chapter/scene, until halfway through when we're finally told. Inconsistencies between action and conversations (claiming one thing, but doing another etc)
Bloody and Brat were over used. The first few times were endearing and cute, but then it became almost every other sentence and it got a bit much.
Ash drives after drinking, a lot, and while on medication. He also drives for extended periods, while knowing that he suffers from flashbacks. It's highly dangerous, but never once mentioned that he's a liability behind the wheel. He could have killed himself or someone else, if he'd had a flashback.
The 'I love you's' are exchanged way, way too early, for my liking.
It's a shame that we see them wimping out over spiders in a nearly 3 page scene, but those pages weren't put to better use by showing the friendship that could/should have preceded Ash and Jaxton's relationship.
Multiple spelling/grammar issues
Incomplete or divided sentences that are cut off in ways that make it necessary to re-read, to gain an understanding of what is meant.

Okay, with the negatives over with, let's look at the rest of the story.

I actually really liked and approved of the multiple flashbacks Ash suffered, told in detail. I just think that his 'reluctance' felt too contrived, due to it only taking a few days to make up his mind. True reluctance could take months or years. Ash basically resolves his problem in less than a month.

There are some unfamiliar terms, to me. I'm from the UK, so thankfully most of the speak is familiar. However, I have to assume that some of the problem is that I (and Google) am unfamiliar with Australian terms. Neither Google nor the glossary could help me with:
“holding it up” - I assumed it was some sort of 'welcome home' salute with a beer/drink, since Ash was walking in at the time. But then Jeff (his brother) seemed really surprised to see him, which threw off that theory. And he got up to hug Ash without having to put down a drink/beer, so I got really confused. I still am, to be honest.
“get along with yourself” - It may be an Aussie thing, but the saying that came to mind was “get a hold of yourself”. However, it's a small thing and may just be getting lost in translation. I knew what it meant, but it still felt odd and out of place.

Ash and Jaxon are great characters, everyone is an individual and there's no clones or laziness in the writing. Ash's reluctance to talk about Army life and what he went through is also spot on, as are the symptoms of PTSD. They're all well handled, sympathetically, but without making Ash seem abnormal or unhinged.

I love the idea of Book, Line, and Sinker. The way that it motivates Ash to get back into life, routine and open up. Although I think his relationship with Jaxon is far too fast, I do like that it's simple and uncomplicated. I love that Jaxon is understanding, calm and reassuring to Ash, whether he wants that or not.

The sex comes in around the 70% mark and is sizzling. There are some really intense scenes between here and the end of the book. However, their first time together was kind of painful – there was a total lack of prep work or lube for Jaxon. It was all about Ash lubing himself and getting in there, without even any touching or anything else in that area. Ouch! The rest was better, but still lacking on that kind of detail.

I really struggled to decide on what to rate this. I'm going with a 3.5, rounded up to a 4. I really see the potential of this story, but the over-kill description took away the brilliance to quite a large extent. I believe the story could have been a novella length and still had impact, if the descriptions were cut down by at least half. We don't need all that weather, travel, flora/fauna, location descriptions. That's not important. What IS important is connection, the growing friendship and the relationship between Jaxon and Ash that we don't really get to see to its full potential.

Although I won't be reading this again, I do want to say that it is a good story. The bones are really great and the emotion portrayed made an impact. The overall idea of the story came through and the characters held their own against the over-flowing description. They managed to shine enough that I went from a purely negative review, for a 2.5-3 star rating, to a 3.5-4 star rating and a more positive review. That's important. I also like what the author tried to do with Ash's PTSD. It's just a shame that it was overshadowed by so much unnecessary description.

Overall, it's a good book, with strong characters and a good plot. It might not be in the big leagues yet (it could be, with some more editing) but it's memorable and sweet. A nice romance with two nice guys who have some hurdles to overcome, to be together without drama. It works.

““You okay? Jaxon asked. He'd come up beside Ash.
“Yeah, I'm fine. Just a bit stiff.”
With an absolute straight face, Jaxon said, “In public, no less? Gracious goodness, I thought you liked me, but this is quite a compliment.””