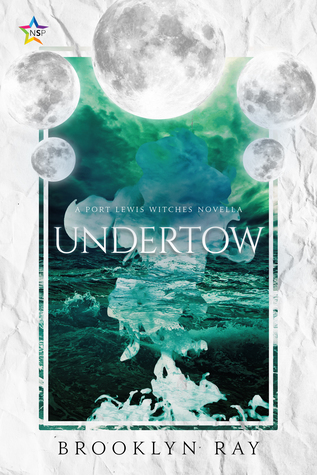 "Port Lewis, a coastal town perched on the Washington cliffs, is home to Crescent Cafe, a slew of micro-breweries, a downtown packed with antique boutiques, and violent, ancient storms. Thunder shakes rooftops and lightning cuts through dark skies, but Liam Montgomery has never been afraid.

One night, Liam hears the scream of a kelpie, a Water horse whose cry foretells the beginning of a prophecy. Kelpies have not set foot on shore for decades, but as Liam digs into his magic and his family’s history, he uncovers a mysterious secret that could ripple into the lives of everyone around him.

Liam’s tea-leaves spells out murder. The life of someone he loves is on the line. An unwelcome kelpie speaks in riddles. The Queen of Water demands a sacrifice.

The Montgomery name is soaked in blood and secrets. Liam’s fate is sealed, but he’ll do whatever it takes to change it—even if it risks his circle, his magic, and his life."


Wow! What can I say? Once again, just as in the first book, the world building and storytelling are on point. I mean, completely and unerringly perfect. I completely understand the world that is created here – a contemporary, real life world that has witches and demons as a subset of the population, not known to “normal” human – and I feel comfortable with everything that happens. Even the stuff I don't know about personally – magic, the circle, the spells – I feel connected and familiar with, because they're written with such realism and detail, without being a dummy's guide or being condescending.

I've loved the Port Lewis Witches series since I read book one. I had that unexplainable feeling when I read it, that I've had only a few times with a series, where I just knew, without a doubt, that it was going to be an auto-buy series and author, for me. The only other series' that gave me this feeling were Lavender Shores, by Rosalind Abel, and the Chronicles of Tournai, by Antonia Aquilante. That's it. Three series, hitting me right from page one, with an instant feeling of being familiar, of being home, of being right.

That's what Port Lewis is – it's a home away from a home, a life I never lived, people I've never met, who are like family, and who make you feel welcome for every moment you spend with them.

The characters are exactly the same as book 1, only told from a new POV – Liam's, instead of Ryder's – and yet they manage to grow organically, without being forced into situations or experiences that don't fit their personalities. They are as true to the characters in book 1 as any character can be when written well. And the chemistry between Liam and Ryder – though I never thought it possible – sizzles with twice the intensity. Not only did Liam seem older and more mature than the previous book, taking charge as it was his element they were working with, but I loved the growth of their bond with each other. That Ryder wasn't irrational or jealous about the kelpie who kissed Liam, that he didn't doubt Liam's love for him. That neither of them doubted what they felt for each other, even when faced with everyone they cared about being against them.

I loved that Donovan became the one who was steady, who held it together despite his own issues, and who was always the voice of reason. Tyler was a little more volatile in this one, but in a way that I can see he's running on fumes and it won't be long before he snaps. I loved the progression of Christy's character, how she was explored a little more in depth and showed a side that we hadn't seen of her before, a loneliness and a sense of being apart from the rest of the circle, while seeing things that she didn't always want to see. I really felt for her.

With a clear timeline, a genuine progression of plot from book 1, without being so closely linked that you couldn't accidentally read them out of order, and a consistent level of characterisation and world building, this one is a win all the way. I didn't read the blurb, when this came up for review on Netgalley, because I didn't care what it was about. It was a Port Lewis Witches book, it was written by Brooklyn Ray, and that was good enough for me. And I wasn't disappointed.

And can I just say – that ending! Such a tease. I read it, blinked, and then had to do a quick little revisit to an earlier scene to make sure I hadn't imagined it. Between the 'sigil of Mars', the Queen coming back in four weeks, the claim that Donovan is in lust but not love, the secrets about Tyler and his father, and the reading saying that someone would hurt Tyler soon, I just can't wait for the next one.

A five star read from page one to 'the end', and thanks to a little nod from the author, one that I'll be buying in paperback as soon as it's released at the end of November. Happy Birthday/Merry Christmas to me!

“The unknown was restless and horrible. It surrounded them, a being with too many eyes and too many teeth, waiting to rip them apart. Somehow, Ryder was still more dangerous than any unknown and any kelpie and any other witch.”